While it’s important to celebrate the advancement of rights for women and girls in the United States, it is essential to recognize the incredible amount of work yet to be done. Currently, there are more CEOs named David in the United States than there are Female CEOs. Women only make up 20% of Congress. At the rate we’re going, it will take 170 years to close the economic gap between men and women. That’s not okay.

Why are these inequalities still so prevalent in 2016? We lack infrastructure to support individuals and organizations in working together long term for achieving gender equality. So often, we’re working in silos and competing for resources, when what we need is to unite in collaborative action, using our power to protect and advance the rights of women everywhere.

To fill this need, we are building a Network City Program to assess and monitor the state of gender equality in cities across the United States and beyond.

The Network City Program will facilitate collective impact at a local level. Each participating city will form a Local Advisory Council (LAC) made up of diverse thought leaders, decision makers and engaged individuals from the community. These LACs will develop a baseline report that evaluates gender equality across several key issue areas. Then, they will use that report to prioritize and determine action steps along with a strategic plan to address the most pressing issues.

In 2017, we’ll thrilled to launch our second Network City Program chapter in Denver! 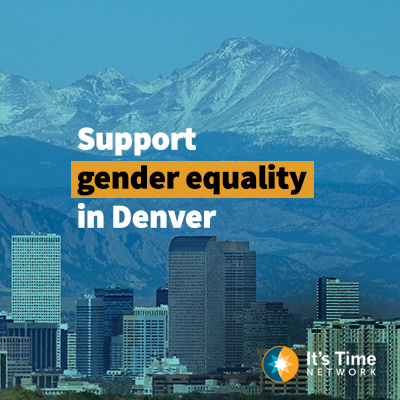 Over time, women in Colorado have made considerable progress toward economic equality, but still lag behind men in significant ways. Women are more likely to live in poverty, earn less and own businesses less than their male counterparts.

A new report from the World Economic Forum predicted that it will take 170 years to eliminate the divide in pay and employment opportunities between men and women. In Colorado, women are paid 82 cents for every dollar that is paid to men, amounting to an annual wage gap of $9,208. In addition, a considerable percentage of households headed by single mothers with children under 18 in Colorado—36.5 percent, or 45,171 households—live in poverty. If Colorado women earned the same as comparable men, the poverty rate for all working women would be cut in half and the state economy will grow.

At the same time, race continues to impact economic security for women in Colorado. Currently, white women earn 77.1 on the dollar of white men, Hispanic women earn 53.8 cents, and black women earn 65.5. The reality is: If policies don’t change, the gender pay gap will worsen, and millions of women will continue to suffer the consequences. As leaders, we need to come together to uplift women and girls, and support their rise to the top of management and entrepreneurship.

Beyond these economic inequities, while it’s often said that Denver is one of the best cities in Colorado for LGBTQ families, issues of discrimination around sexual and gender identity remain. A person can be married on a Sunday and fired from their job on a Monday. With Denver ranked 9th for the largest LGBTQ communities in the United States, it is imperative that we address the discrimination, abuse, violence and exclusion head on. By advancing systemic change at a local level, the Network City Program can protect and empower the rights of those across the nation.

Despite the important work of mayors, governors, local, state and national legislators, violence against women continues to be a major and persuasive public health problem in our country and around the world. In Colorado specifically, 73% of family violence victims are female. Unfortunately, there are too few services available to protect these women, and those that exist  are often unorganized, underfunded and unable to make the necessary impact needed to save lives.

While these issues affect women across the nation and around the world, the Network City Program is piloting in Denver to further advance and support the initiatives put in place by organizations that are working on behalf of women and girls on these issues and more.

Building the Program in Denver

To advance lives across the nation, it’s critical that we address these issues and the many others that women and girls face in Colorado. Individuals and organizations must be supported in building the necessary infrastructure to unite in action and create change. Leaders in Denver must assess their cities specific needs and determine which actions steps need to be taken. By addressing these issues collectively, network participants will activate and engage their communities to work on projects that will impact the lives of women across sectors.

We need your help to build out this infrastructure! For a minimum of $12 a year, you can help bring individuals and organizations together for real change, starting in Denver. Learn more about it and make your contribution here.

Your City Could Be Next

We’re piloting the Network City Program in San Francisco and Denver and we want you with us! Learn more about this vital network and discover how your support can help accelerate gender equality in your city.