Our nation was founded with a Declaration of Independence and yet, from time to time throughout US history leaders and movements have recognized that we are dependent on one another and upon the Earth for our well-being. Long before the founding of this country, indigenous people around the world have honored their interdependence with nature and built their societies accordingly. It’s time to Declare Interdependence to mark a new era in our nation. Interdependence as an underlying principle of our democracy has been invoked many times.

Here are some memorable moments in the history of interdependence. 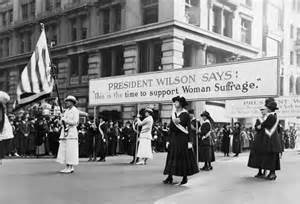 Woodrow Wilson and the Suffrage Movement

In his address to the Senate on September 30, 1918, President Woodrow Wilson made an impassioned plea for the ratification of the 19th Amendment, which would grant women the right to vote. Citing the invaluable service of women during World War I, Wilson said:

Democracy means that women shall play their part in affairs alongside men and upon an equal footing with them….

Are we alone to refuse to learn the lesson? Are we alone to ask and take the utmost that our women can give, — service and sacrifice of every kind, — and still say we do not see what title that gives them to stand by our sides in the guidance of the affairs of their nation and ours? We have made partners of the women in this war; shall we admit them only to a partnership of suffering and sacrifice and toil and not to a partnership of privilege and right? 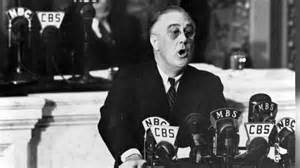 Addressing the nation and his own Party during the Great Depression, Roosevelt called for solving the nation’s problems by acknowledging each interest group’s interdependence with every other group.

Never in history have the interests of all the people been so united in a single economic problem….What is the measure of the security of each of those groups? We know well that in our complicated, interrelated credit structure if any one of these credit groups collapses they may all collapse. Danger to one is danger to all….
That is why we are going to make the voters understand this year that this Nation is not merely a Nation of independence, but it is, if we are to survive, bound to be a Nation of interdependence–town and city, and North and South, East and West. That is our goal, and that goal will be understood by the people of this country no matter where they live.

The 1970s were a decade of awakening global and environmental consciousness. The World Affairs Councils, a non-partisan network of regional councils dedicated to educating, inspiring and engaging citizens on critical global issues, took on the topic of global interdependence through its Philadelphia Council.

The Council’s Declaration of Interdependence was the first to address the issue of finite global resources, and to think in planetary terms about the Earth’s human population as well as the health of all ecosystems.

WE AFFIRM that the economy of all nations is a seamless web, and that no one nation can any longer effectively maintain its processes of production and monetary systems without recognizing the necessity for collaborative regulation by international authorities.

Vocal critics cited among their chief complaints of the Declaration its lack of reference to God, and the use of the term “New World Order.” The Declaration was signed by 24 Senators and 82 members of Congress.

The Philadelphia World Affairs Council based many of its educational materials and programs on the precepts of its 1976 Declaration of Interdependence.