The first weekend of May, I was in Baltimore with the Okuu Indigenous Delegation, a wonderful group led by elder Kathy Sanchez from the San Ildefonso Pueblo of the Tewa nation in New Mexico. The Okuu delegation had originally planned to come to the city for the “It’s Time 2015″ Women’s Leadership Summit. But when the governor announced the state of emergency, the summit (which was to have been a major conference on women’s political, social, cultural and spiritual leadership for the 21st century) was cancelled. However, many of the Indigenous and African American women who comprised the Okuu delegation wanted very much to be present in the city and be in solidarity with the Baltimore community and offer ritual medicine from our traditions for strength, justice and healing. So, we went. 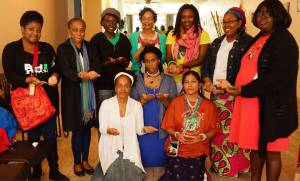 We were women of 8 sovereign Native nations and women who represent African American southern and Afro-Brazilian ritual traditions. We had some wonderful encounters with local community members – including Jason Harris, Lauren Oyabemi Byrd, Shameeka Smalling, Ayanna Barmore, and Camille Weanquoi at The Living Well; and Cecil and Sonya Gray and others at the Northwood Appold Community Academy. In both places, the delegation did ceremonies of blessing and healing for those present and for the Baltimore community as a whole. Many of us also joined the protests at Penn-North and City Hall and were very moved by the spirit of determination, creativity and intergenerational and interracial inclusiveness we witnessed – even in the midst of a strongly militarized police force that felt very much like occupation.

While we were in Baltimore, 20 copies of Remnants arrived – the first box of books, fresh off the press – and I was able to share copies with all of the women in the delegation and some other friends in the city as well. My cousins Gloria and Jean were with me and it was a special blessing to have them in the circle as we honored and celebrated the wisdom, love, protection and fierce resolve of Mother Earth, the Water Mothers, and the mothering energies in women of all nations.

This picture was taken at The Living Well, a beautiful community space in Baltimore where some local activists gathered to prepare food for the protestors, to share stories, and where Sarah Wells Headbird, a young ritual leader of the Ojibwe nation, offered sage, sacred water and prayers to cleanse and bless the folks continuing on the front lines of the BlackLivesMatter movement in the city. My mama would have been so happy and so proud!