Despite decades of efforts and the work of many great organizations dedicated to achieving gender equality, we still aren’t there yet!

Why aren’t we? Because, we lack the infrastructure to consistently measure the inequalities and to then support organizations and individuals in working together long term to make sustained progress across all sectors. Now, more than ever it’s time to protect and advance the rights of women and girls.

That’s why we’re building a Network City Program, to build our capacity to work together across issues and across sectors and to exercise our power at the local level. Here’s how you can activate now, and help us build momentum as we move forward together:

To achieve impact at the local level, a Local Advisory Council, comprised of diverse women leaders and allies, will form in each Network City to assess and monitor the state of gender equality in their community. With a baseline report on the status of women and girls, the council will determine actions to prioritize and address the most critical issues. From there, individuals and organizations join the network to work together on a shared agenda for action. Each Local Advisory Council will use a standard set of metrics to track progress and to demonstrate measurable impact.

In 2016, the first Network City Program pilot was launched in San Francisco. Denver will launch in 2017, and the program will begin to scale nationally in 2018.

Though San Francisco is a national leader in gender equality, significant gaps still exist across sectors and some gaps are worsening. 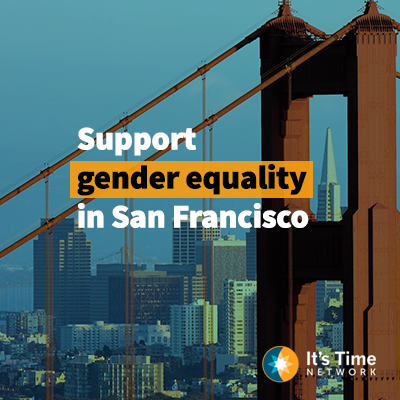 For example, in San Francisco, women still earn less than men. In 2009, men with bachelor’s degrees made about $8,500 more than women with the same degree. Unfortunately, as the city’s economy has grown, so too has the difference in income, reaching about $15,000 in 2014. Though many tech firms, which comprise a great deal of the job landscape in San Francisco, have made a concerted effort to both improve gender diversity and create income parity among staff, a lack of advancement opportunities continues to hinder women within the industry. As the technology world fuels San Francisco’s growing gender pay gap, we need to support women’s advancement by providing opportunities to women and girls in that sector in particular.

Women also continue to face social, economic and political challenges in San Francisco. Currently, San Francisco has the second highest homeless population in the United States - and one out of three are women. A number of issues force women onto the streets, including health problems, escaping domestic abuse or sex trafficking, and low to no income. Just last year, nearly 500 cases of human trafficking were reported in San Francisco. Of that number, 80% were women. With the FBI identifying San Francisco as one of the top spots in the nation for child commercial sex exploitation, combating this issue is key. By strengthening the collaboration amongst impactful organizations, the Network City Program can help create lives free of violence and provide greater stability for all women and girls.

San Francisco also has the highest population of adults who identify as LGBTQ. While many may believe last year’s U.S. Supreme Court decision establishing marriage equality in all 50 states was a clear victory for the LGBT rights movement, there is still so much to do to ensure equal rights and freedoms.

Building the Program in San Francisco

Collaborative action is absolutely vital, and we need everyone involved with this work in San Francisco. For a minimum of $12 per year, your support will help connect us all in meaningful work for gender equality. Let’s work together in buiding the Network City Program in San Francisco!

Your City Can Be Next

We’re piloting the Network City Program in San Francisco and Denver, and we’re planning to expand nationally in 2018. If you want to learn more about the program and how to start a chapter in your city, please get in touch with us here.